Projects with RSA Involvement with Design and/or Traffic Management Auditing.

Road Safety Audits was instrumental in undertaking the pre-opening audits for one of Victoria’s largest ever freeway closures to facilitate re-profiling and re-surfacing works.  This  involved work on both the CityLink Domain and Burnley Tunnels which constitute an approximate combined length of 5km.  The work was successfully undertaken during the 2013-2014 Christmas-New Year Period.  As a consequence of the critical role of these tunnels in Melbourne’s transport network, their closure required very detailed assessment of alternative traffic routes within the central city region.

Regional Rail Link is a major new rail line running from West Werribee to Deer Park and along the existing rail corridor through suburbs including Sunshine and Footscray to Southern Cross Station.

Regional Rail Link separates regional trains from metropolitan trains – for the first time giving Geelong, Bendigo and Ballarat trains their own dedicated tracks through the metropolitan system from Sunshine to Southern Cross Station. This will increase capacity for both the regional services and the suburban services on the Werribee, Sunbury and Craigieburn lines.

In addition to the dedicated tracks for regional services, the project includes new stations at Wyndham Vale and Tarneit, new platforms at Southern Cross Station and construction of a new rail bridge over the Maribyrnong River. RSA was involved in preliminary audits of road crossings and is now providing audit services to contractors building this $4 billion project.

Legacy Way is a 4.6km underground toll road linking the Western Freeway at Toowong with the Inner City Bypass (ICB) at Kelvin Grove. Construction includes two parallel tunnels with cross linkages, and tolling and safety systems. RSA is involved in both design audits and traffic management audits for the project.

This project, worth A$475m, involves the construction of 10km of dual railway track and a new elevated Springfield railway station with a park-and-ride car park and an integrated bus/rail interchange facility.

The project includes widening of the Centenary Highway between Springfield Parkway and Johnson Road and the construction of a new 3.5m wide path between Richlands and Springfield, partially for bicycles and partially “shared-use”.

Urban Superway is a consortium which is building what will be known as the Western Expressway, a 4.8 km expressway connecting between the Port River Expressway in the north and Regency Road in the south. The majority of the project is to consist of an elevated 6-lane expressway built on columns above South Road, with ground level works also being undertaken to improve South Road in the Wingfield area. At $812 million, this is the biggest infrastructure project ever undertaken in South Australia. RSA is conducting both design audits and traffic management audits for the project. 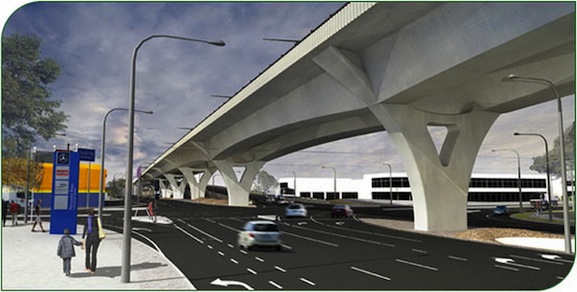 The M80 Ring Road Upgrade will improve the 38km Western and Metropolitan Ring Roads, from the Princes Freeway at Laverton North to the Greensborough Highway at Greensborough, expanding it to a minimum of three lanes in each direction.

The M80 Ring Road Upgrade is a $2.25 billion project, jointly funded by the Victorian and Australian governments and is expected to take more than 5 years to complete.

It is important that all Victorians can access public transport including people with disabilities, the elderly and frail and parents with prams. Almost 20 per cent of Victorians have a disability and ageing patterns show that this figure is expected to increase in the years ahead. The Accessible Tram Stop Program involves the construction of about 350 new platform stops in Melbourne as part of a $250 million, 10-year investment in improving public transport accessibility. Features at tram stops include; access paths, ramps, Tactile Ground Surface Indicators (TGSIs), waiting areas and stairs, lighting and furniture. More than 100 wheelchair-accessible tram stops are now open. RSA has provided auditing advice for the development of these tram stops. 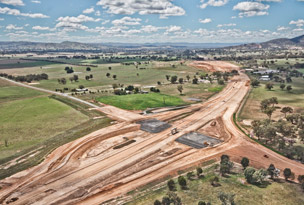 Roads and Maritime Services (replacing Roads and Traffic Authority) is building a dual carriageway bypass to the west of Holbrook to removing many cars and heavy vehicles from the streets of Holbrook. The bypass will also improve the efficiency of freight movements along the Hume Highway, the main transport corridor between Sydney and Melbourne. It is approximately 9.5 kilometres long and will run from four kilometres north of Holbrook where it will deviate west from the existing dual carriageways to cross Wagga Wagga Road. RSA is carrying out traffic management audits. 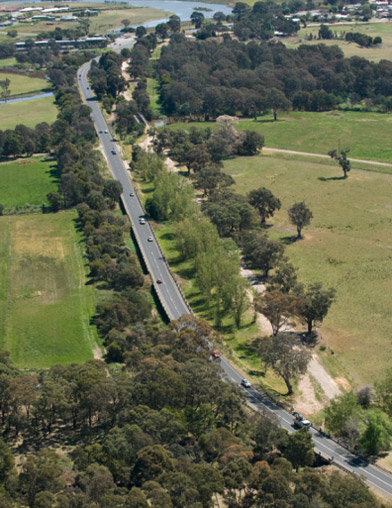 RSA is conducting the traffic management and design audits for the Princes Highway (Wurruk to Sale) project which involves reconstruction and duplication of the highway to the east of Sale for approximately 4km between Reid Drive, Wurruk and Reeve Street, Sale. Major construction began in January 2011 and is expected to be finished in late 2012.

RSA is conducting design and traffic management audits on this project which provides a strategic link for road freight, tourism, farming and regional development from Geelong to the South Australian border. 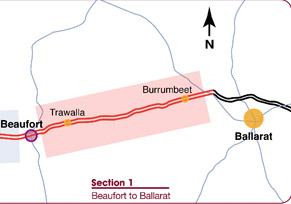 The Western Highway (A8) is being progressively upgraded as a four-lane divided highway between Ballarat and Stawell. RSA is conducting traffic audits on the first section (Burrumbeet to Beaufort). Currently more than 5500 vehicles travel the highway west of Ballarat each day including 1500 trucks. This traffic is expected to double by 2025. Works on this 8km section commenced in April 2010 and will be completed in 2012.

The $188 million Nagambie Bypass is the next stage in the progressive upgrading of the Goulburn Valley Highway. It forms part of the national highway link between Melbourne and Brisbane. The Bypass will extend the four-lane freeway route for 17km to the east of Nagambie between Mitchellstown Road and Moss Road. RSA is conducting traffic management audits on this project. 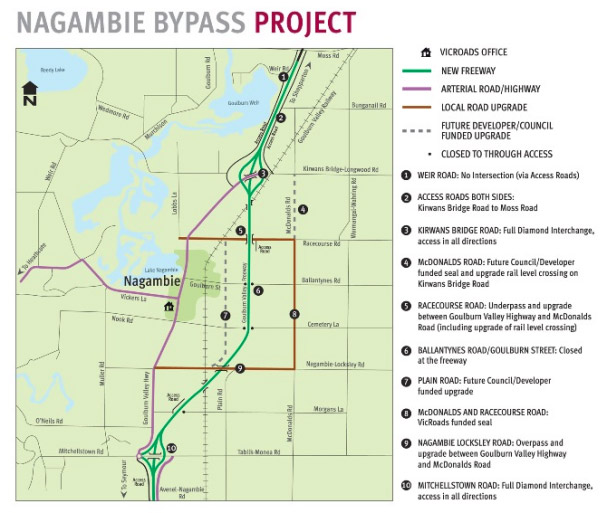 RSA is conducting traffic management and design audits on this $74.6 million State Government funded project. It provides a new six-lane divided road link extending 3.5km from Springvale Road to Perry Road in Keysborough along the existing road reservation. It will complete the arterial road network connection between Westall Road and the Dandenong Bypass as part of an 11km direct route from Heatherton Road at Springvale to the South Gippsland Highway at Dandenong South. It will open in 2013. 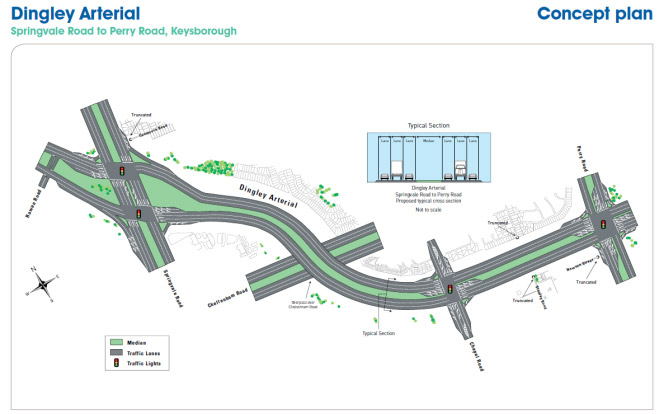 RSA is working with this alliance (Thiess, Ausgrid and Parsons Brinckerhoff) to deliver Ausgrid’s works program of laying new high voltage cables through the streets of Sydney. RSA is providing audits, as well as specialist design advice on the barrier layouts. 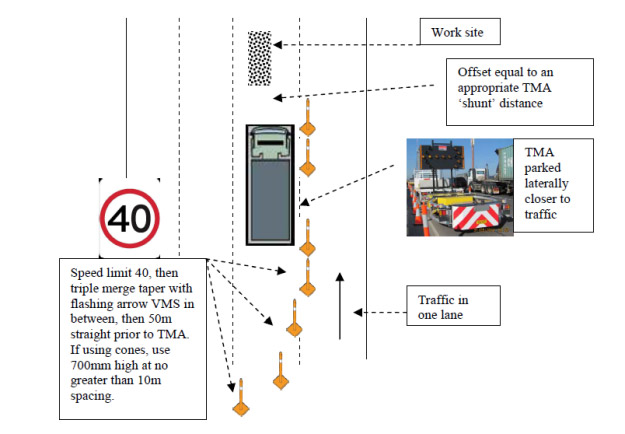 RSA is carrying out design and traffic management audits for a new modal interchange including a premium railway station and associated infrastructure works including the Palmers Road overpass, a pedestrian bridge over the Princess Freeway to Geelong, bus and taxi facilities, a carpark and rail track plus signalling realignment works.