Safe Work Australia is currently in the process of preparing two national traffic management codes of practice – for construction work and for non-construction work (such as logistics depots, factories, warehouses, ports and shopping centres). These are intended to be a practical guide to employers to achieve their health and safety requirements under the Work Health and Safety Act (WHS).

In February 2011, VicRoads released a 2-page, largely pictorial “Easy Read Guide”, in an attempt to simplify the process of traffic management planners and contractors interpreting the Code of Practice. This has been welcomed be some contractors because it simplifies the process of sign set-ups.

Another criticism is the use of the guide as a sole tool for traffic management set-ups, rather than consulting the Code of Practice and applying a risk management approach. This issue has been noted in relation to both contractors and VicRoads auditors. One consequence of this is the overuse of “Prepare to Stop” and “Traffic Controller” signs, regardless of whether traffic is being stopped. Overuse of these signs reduces their credibility which may lead to drivers ignoring them in situations where they really are needed.

VicRoads is working on a second version to address these issues. 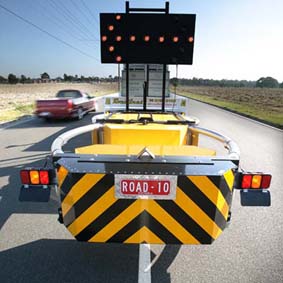 These are essentially mobile crash-cushions which can be used to protect stationery or mobile worksites from errant vehicle impacts. There has been a big increase in the use of TMAs during the last couple of years – to protect workers during short-term works in high-risk locations such as on freeways. Attenuators are attached to the back of trucks which are typically located 30m or so in advance of the work area in order to stop any errant vehicle from reaching the work zone.

VicRoads is currently in the process of preparing “Interim Guidelines for the use of TMAs”.

AS1742.3 2002 has recently been superseded by AS1742.3 2009. Changes to a variety of areas were made including; signs, barriers, terminology, short-term low-impact works, edge clearances to traffic and so on. 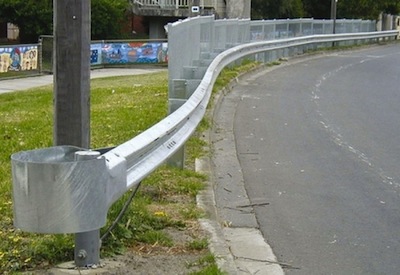 Brifen have successfully tested a guard rail attachment product that seems promising for the protection of motorcyclists. It is a fabric shield suspended from the rail and attached (offset) to the base to achieve tension and prevent the rider from sliding into the posts. 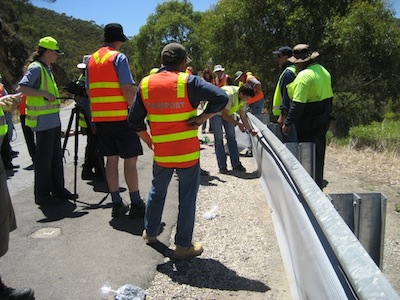 A contractor is in the process of brining an automatic traffic cone machine to Victoria. The machine is a truck that automatically installs and picks up traffic cones. This is intended to reduce the risk to traffic workers, particularly on major freeway works. 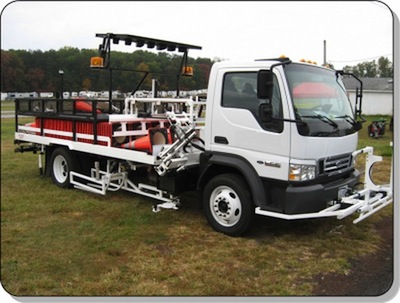